Why I Won't Let My Daughter Play With My iPhone 4

OK, so I got the new iphone last week. I was so excited for it to come- I had not upgraded to 3GS and it has been 2 years of waiting! When it first arrived, I took it out of the packaging and it felt like a balloon deflated within me. The phone seemed so cold, heavy, and fragile. I didn't feel comfortable handling it. My daughter, who is six, and is used to playing with my phone reached out for it... I quickly put it in the box and told her it was off limits.

Lets see, I have over 100 children's applications/games for the iphone- my daughter could not understand why she couldn't play on the new phone. I could not understand why I was no longer excited to play with the new phone. The next day, I loaded and synced the phone. I looked online and read several articles on "why NOT to buy iphone 4". I just wanted to be excited about it! Instead, I pondered its return. Finally, I reserved myself to giving it another chance- a 2nd chance at a 1st impression with me.


After everything was loaded on, I activated it and started using it. The more I used it, the more satisfied I became with it. I still felt uncomfortable throwing it in my purse, and I was UBER careful when using it, but its getting better. I ordered cool new cases, removed lots of the games and set it up just for me. My daughter was heartbroken when she saw me deleting her games. I assured her that it would be okay, and it was. She was OVER THE MOON with excitement when I gifted her my iphone 3G. People talk about Suri Cruise being spoiled... they never met my baby girl:). Now, I am guaranteed a phone back up (God forbid if anything happens to my iPhone 4), and my little one would have her games and wifi! Perfect, right?


You always want what you cant have... I've caught Marianna sneaking to play on the new phone several times. I had to finally explain to her why I would not let her play with my phone:


1) the new glass casing is not child friendly. Not that the old one was either, but it seems less fragile. This thing feels like I'm holding a glass holy grail- and Gizmodo's photo of what happened when one of their folks dropped the iPhone 4 is traumatizing (http://gizmodo.com/5572227/fuuuuuu-gizmodos-first-accidentally-dropped-iphone). Until I get a case, and NO, a bumper won't suffice; I am on high alert.

2) a child WILL break this phone (oh, I just said that); moving on.

3) Mommy deserves something that is JUST mommy's. I haven't used the restroom by myself in almost seven years... Can't I have my own phone?!?

5) If you are like me, let the youngun' have your old phone, or buy them a myPC Keyboard (shameless plug) so that they feel ownership over their OWN technology.


6) The touchscreen is so sensitive, she will end up calling someone I dont want to speak with- It has happened several times over the last few days with me... I can only imagine what will happen with a six year old.


She may be angry now, but it's ok, one day she will understand. She knows I love her and she loves me. See? 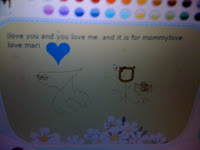 Elizabeth
I am the mother of a 8 year old who has been exploring the computer since she was four months old. I am also a seasoned technologist and biz owner of a manufaturing company that creates custom tech tools for special needs markets. Buy the myPC Stage I Keyboard for toddlers- ITS SPILLPROOF! www.mytechstart.com